STORNOWAY, HERRING GIRLS AND A FISHERMAN 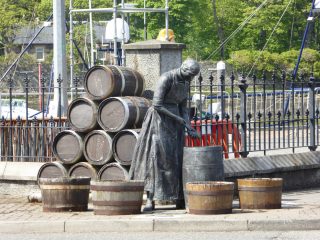 “A picture is worth a thousand words”  – true…. and this idiom can equally be applied to a sculpture.  In Stornoway, the main town on the island of Lewis in the Outer Hebrides, there’s a statue of a young girl sculpted by Charles Engebretsen and Ginny Hutchison.

Fishing boats are moored alongside in the harbour and you don’t need to be a historian to see that this sculpture is of a young girl in the late nineteenth/early twentieth century going about her daily business of gutting herrings, ready to be placed into the barrels beside her

It’s one of those statues that invites you to take a closer look from all angles.  Partly because it’s at ground level and also, because it’s life size, you can look the girl right in the eye, see her bandaged fingers and really appreciate the hard labour she’s undertaking.  This sculpture piqued my interest, so I did a bit of research into the history of the herring girls. 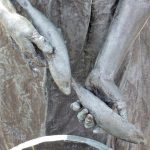 The women and girls worked in teams of three called “crews” – two gutters (who used a special knife called a cutlag) and a packer.  On average, 30-50 herrings would be gutted per MINUTE and then packed into barrels in tiers covered with salt.  Each barrel would hold roughly 700 herrings.

The main European markets for salted herrings were Germany, the Baltics and Russia.  Unfortunately, both World War I and World War II eventually brought an end to the industry.  This sculpture is an immediate visual aid to any visitor t0 Stornoway in appreciating the herring girls’ important economic and social contribution to the history of the Outer Hebrides.

Literally a few feet away from the bronze sculpture of the herring girl is something very different. It’s a fisherman holding a salmon, carved by local joiner and artist, Uisdean Paterson. 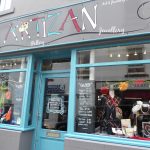 While you’re in Stornoway, there’s a great café called Artizan to pop in for a delicious cup of coffee (and it really is!) and a bite to eat nearby.

On the way you’ll pass this STORNOWAY MURAL 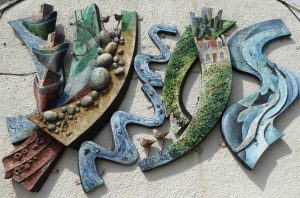 – by Iain Brady who lived for a time on Lewis and who’s now based on the Scottish mainland.